A study led by the University of Bradford in the United Kingdom reveals that the drug pimozide can reduce cancer cell numbers, growth, and spread in triple-negative breast cancer.

In a paper that is to feature in the journal Oncotarget, the researchers describe how they used laboratory cells and mice implanted with tumors to demonstrate the drug’s effect.

Some of the tests they carried out also suggest that pimozide could be effective against non-small cell lung cancer, which is the most common form of lung cancer.

Following this success, the team has applied for a patent and intends to start clinical trials in humans as soon as funds permit.

Triple-negative breast cancer is a type of breast cancer in which pathology tests return negative results for three types of receptor: estrogen (ER), progesterone (PR), and human epidermal growth factor receptor 2 (HER2). Around 10–20 percent of breast cancer cases are of this type.

Receptors are cell proteins that specialize in receiving signals that control cell properties, such as growth.

When breast cancer tests are negative for all three receptors (ER-, PR-, and HER-), it means that none of them drive growth and that hormone therapies that target them — such as tamoxifen and trastuzumab — will have little effect on cancer progression. 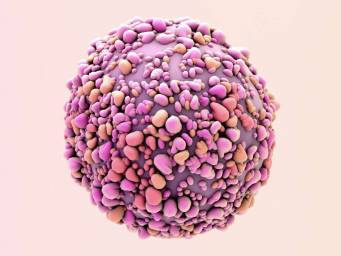 “Triple-negative breast cancer,” says lead investigator Mohamed El-Tanani, who is a professor of molecular pathology and cancer therapeutics at the University of Bradford, “has lower survival rates and increased risk of recurrence.”

Currently, few treatments target the unique molecular features of triple-negative breast cancer. The findings of Prof. El-Tanani and his colleagues suggest that pimozide could fill this gap.

“And because this drug is already in clinical use, it could move quickly into clinical trials,” he explains.

Homing in on pimozide

Some other antipsychotic drugs may also have anticancer effects. Although some studies have found lower rates of cancer in people taking antipsychotics for the treatment of schizophrenia, other studies are inconclusive.

Pimozide is an antipsychotic “neuroleptic drug” that the United States has approved for the treatment of schizophrenia and Tourette’s syndrome. Previous studies have indicated that it could be effective against various cancers, but the molecular mechanisms involved are not known.

Prof. El-Tanani and his team previously identified that a protein called RanGTP is a key driver of growth and spread in triple-negative breast and other cancers.

For the new investigation, they screened thousands of approved drugs for their potential to block the protein. Pimozide emerged as the most promising candidate.

Mice with triple-negative breast cancer implants treated with pimozide showed a 61 percent decrease in the number of tumors, and a 65 percent reduction in tumor size, compared with untreated mice.

In addition, pimozide treatment significantly reduced cancer spread. There were “up to 94 percent fewer” secondary tumors, or metastases, in the mice that took the drug compared with those that did not.

They found, for instance, that pimozide blocks the production of VEGFR2, which is a protein that helps tumors maintain their own blood supply. It also prevents the synthesis of an enzyme that is involved in metastasis, and it stops the generation of myofibroblasts, which are a type of cell that helps tumors grow.

“Our study shows that by acting as a RanGTP inhibitor, pimozide was able to block a number of key pathways that contribute to triple-negative breast cancer growing and spreading.”

Title of the document APPLY NOW !!

best toilet paper in the world

How Long To Boil Corn On The Cob

Welcome to Job Posting Website. We are dedicated to provide latest job information to our users. We provide genuine and true job vacancy from all around the world.

If you have any question, please feel free to contact us any time.